Battery-powered garden tools on the rise 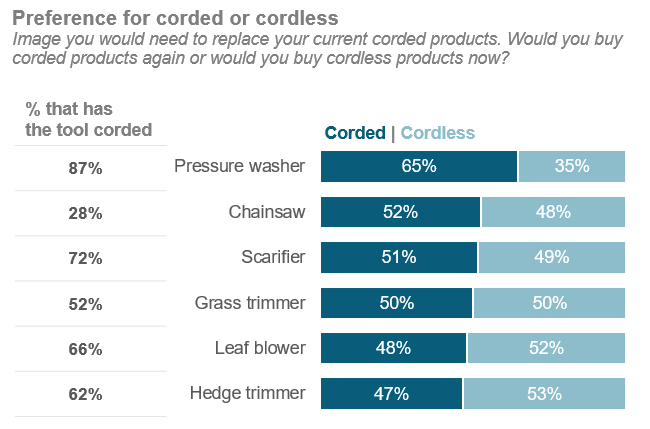 As one could imagine, the majority of the garden owners likes to keep the garden in the best condition possible. One way of doing is this is to clean, to prune, to trim, to saw, and to fertilize on a regular basis. This could all be done by using manual tools, but using a powered garden tool might just make the task a bit easier.

In Europe, the majority of the garden tools is already electric, being corded or cordless. There is one exception to this and that is the chainsaw, which is predominantly petrol powered. Grass trimmers and hedge trimmers are more often cordless compared to other powered garden tools.

More corded tools likely to be replaced with cordless variants

The majority of the powered garden tools is powered by electricity via a cord. However, it is expected that when the current corded products need to be replaced that almost half of them will replaced with cordless tools. This means that in the upcoming years we will see a serious increase in the number of cordless tools.

There are two main reasons for this shift. The first is that the battery capacity and power has increased in the past years, making a battery-powered garden a serious competitor for the corded tools. The second reason is that the garden owners are more and more aware of this increasing battery capacity and power and therefore now see more benefits than barriers to purchase it. The most perceived benefits are the unlimited range, the convenience and having power at places were no power outlet can be found

For more information about our expertise and research on building materials please contact the responsible partner below.
We look forward to help you.

THE TREND CONTINUES People still do many home improvement projects, also after the pandemic

PREFAB IS THE FUTURE How can manufacturers of installation products get a piece of the prefab pie?

Will the market run out of painters, and should we be worried?

POSITIONING OF THE RETAILER IN THE DUTCH HOME IMPROVEMENT MARKET

PREFAB MOST APPLIED IN PROJECTS IN THE NETHERLANDS, THE UK AHEAD WHEN IT COMES TO ADVANCED PREFAB APPLICATIONS

For over 25 years, USP is specialised in the following sectors.

How to increase your turnover through customer satisfaction?

The more distinct your brand is, the more valuable it will become.

A customer journey is a customer's personal experience with your company.

Provide your product development and design team with end-user insights

Pricing is and always has been the biggest profit driver. We help you setting the right prices for your product

Better understand the unmet needs of you (potential) customers, identify growth opportunities and reach your target group in an effective way.

Know which elements of the customer experience have the most impact on overall satisfaction, recommendation, and retention.

​Read our articles based on the insights from our Market Reports.

Market Research Case Studies and industry experience can bring background and thought to any research project.

About what we do, our organization and our people.

What we do, in words and numbers.

The people who make USP.

We have different challenging roles.